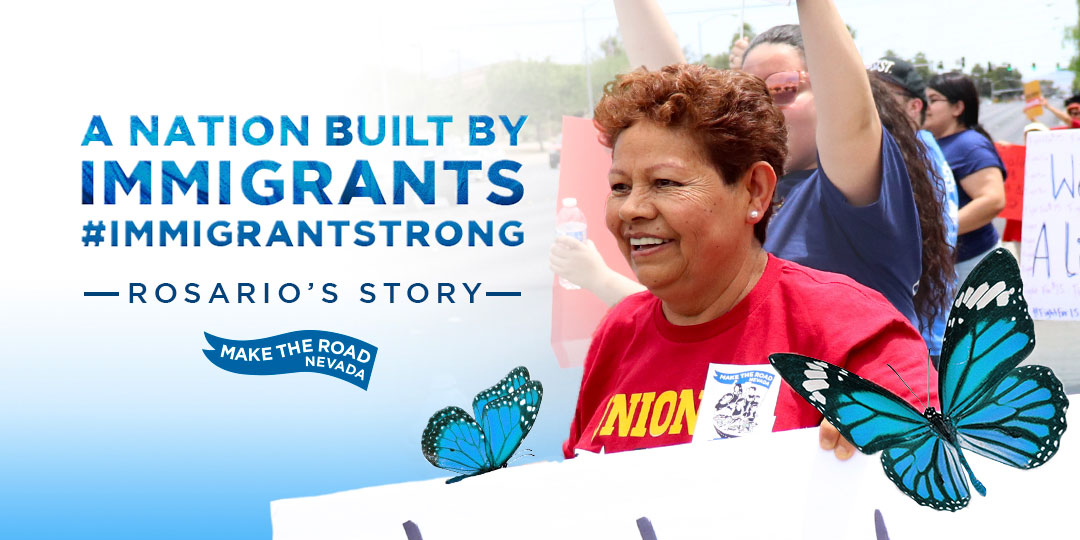 As a part of Immigrant Heritage Month, we are highlighting the experience as an immigrant of our member leaders. Rosario Moreno is a founding member of Make the Road NV! She is a part of our “Familias Unidas” committee, that focuses on the economic justice for the working families in Nevada. She has taken an active role at weekly member meetings, as she cooks for all the members and even leads the discussions at times. Without Rosario’s contribution, we may not have been as successful in pushing bills through the Nevada legislator, or recruiting new people to the meetings. Her “Lucha es Fuerte!” and her determination was shown by going on four bus trips to Carson City, urging legislators to support Earned Paid Sick Days!

Rosario emigrated from Mexico City, Mexico, with her husband, with only one goal, providing a better life for her children. She was fleeing a life of poverty and knew that life in the United States was going to be something different, but definitively better. Her life in Mexico was hard, she was stuck in poverty like so many Mexicans that decided to search for opportunity across the border.

Since having moved here, Rosario has experienced a change in the treatment and the way immigrants are viewed in the US. She tells us that life for an immigrant has become more difficult and much more dangerous under the current administration compared to when she first arrived in the US. The rhetoric that President Trump spews has caused fear in so many contributing immigrants. She believes that immigrants, like her, contribute everyday just by going to work. She compares a day without immigrants in Las Vegas, would look like a ghost town. Her message to immigrants struggling under the current administration is “La unión hace la fuerza” meaning unity creates strength. There are power in numbers and we at Make the Road NV are here to make sure that our immigrant communities voices are united, strong, and heard!