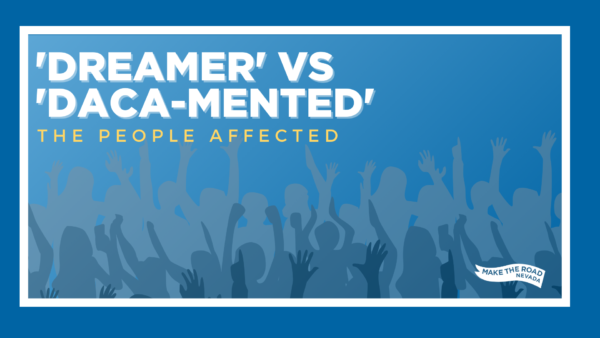 The subject of DACA is more than a piece of legislation, it is more than statistics, it is the stories of our friends and families whose struggle often gets criticized for having come to the states illegally. Those who do not qualify for DACA are left with an unnecessarily more difficult way to achieve citizenship and are excluded from an idea of ‘exceptional undocumented youth’. This idea of exceptionalism comes from the many requirements that a person must meet in order to qualify for the DREAM Act. These requirements include having at least a High School diploma, having no serious convictions, and being of ‘good moral character’. These requirements feed the narrative of the good versus the bad immigrant. These ideas and labels promote division among the immigrant community and create a false perception of the undocumented and documented immigrant community.

Our families and friends have DACA, others don’t, but either way, they are human and are deserving of respect and dignity. Their stories play an important role in the grander immigrant story.

Audrey lives in Las Vegas and identifies as a DREAMer. For her, like many others, the term brought with it a sense of belonging in a world where she felt as though there was no place for her. Being born in another country and brought to the states as a young child she grew up in the states, lives in the states, has a life in the states, the states and life here are all she knows;

“ I don’t feel like an immigrant, this is my home, this my space, this is my culture, this is all I know, I’m not an immigrant. I don’t know anything else.”Audrey, DREAMer and Make the Road NV’s (MRNV) economic organizer.

For those who do not qualify for DACA, the reality is far more daunting as they have no protections against deportations, are left with a more difficult way to citizenship, have to find jobs willing to pay them in cash, and are oftentimes subject to abuse. Due to their fears of being deported, these abuses sometimes go unreported. This unfortunate reality is lived on a daily basis by many. An MRNV member identifies as undocumented and ‘feels as though there is a target on her back’. The term DREAMer to her reflects a dream that she doesn’t want to be her life. She wants it to be her reality, a path to citizenship, a safe job, a safe place for her family.

DACAmented folks often are met with questions about their status and are criticized for not being a citizen. These questions may come with positive intentions, however, they produce emotions of frustration and of hopelessness as a result of the difficulty to navigate the immigration system,

“People have been fed an idea that [the immigration system] works and that it is a straight line to citizenship, but it isn’t.” Lalo Montoya, political director of MRNV, member of the DACAmented community.

When asked about what the documented community can do to help the fight for citizenship, Lalo “Be an agent of change with me [ I encourage you] to imagine a country that doesn’t yet exist. Fight with me to make it happen. I need to know that you are gonna shield me from deportation, that you are gonna be a part of the movement, [not] just be a bystander. I’m not asking you to lead [the movement], I’m asking you to [help] fuel it. Reimagine the country as what it should be. Don’t just watch it happen, be a part of it. Don’t feel that you can’t speak up because you are not directly impacted.”

DACA is in no way perfect, but it does alleviate some of the fears that come with being undocumented. Our community deserves to work in a safe environment, earn good wages, have equal access to help, and should be able to live without fear for what may come. Our families are not at fault for the lack of a path to citizenship. This week we want our DACAmented family to know that we hear you, we fight alongside you, and we will stand with you and before you in this fight to citizenship, this path to dignity and respect. Join our fight and consider donating to the DACA fund to help those in our community renew their DACA.

Call to action for DACAmented community- urge those who can vote to vote, don’t give up, we are with you!

For info on immigrant justice and MRNV please contact us at amigxs@maketheroadnv.org

To donate to the DACA fund:  http://bit.ly/DonateMRNV