Posted at 23:07h in Justice for Puerto Rico by mwilloughby

On September 20th, 2017, Hurricane Maria tore through communities in Puerto Rico devastating the Island. Red tape and willful neglect by the federal government have blocked an adequate relief response. Many people have died due to government dysfunction and corruption.

Now, #2YearsAfterMaria, we stand together to remember those we have lost with a unified display of solidarity with Puerto Rico and those on and off the island.

Over 200,000 Puerto Ricans have fled the island in search of a roof over their heads, jobs and overall a better future. Milagros and Maria Isabel are two of our members who fled the island after Hurricane Maria. They left their homes and came to find some kind of peace with family members living in Las Vegas. What they didn’t expect was to find roadblocks on their path to rebuilding their lives in Nevada. 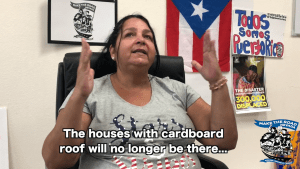 Make the Road NV has made a commitment to fight for the dignity of those living on the island and the millions of Puerto Rican’s that were forced to make the mainland their home by lifting up their demands and taking action.