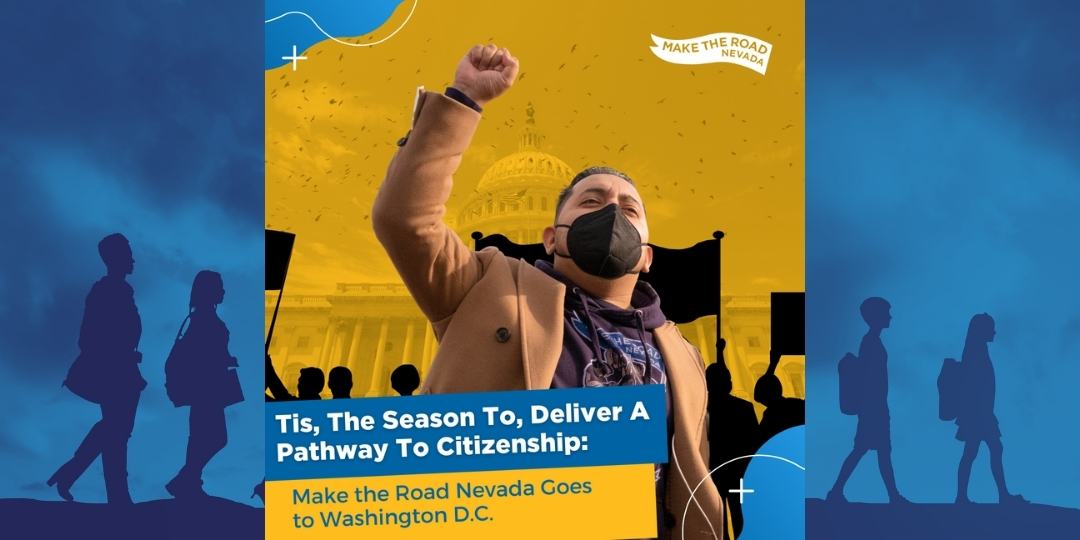 14 Dec ‘Tis, The Season To, Deliver A Pathway To Citizenship: Make the Road Nevada Goes to Washington D.C.

Posted at 12:50h in DACA, I am a DREAMer, Immigrant Justice by mwilloughby

Make the Road Nevada staff and members visited Washington D.C. Dec. 6 through Dec. 8 to attend the We Can’t-Wait march, press conferences, and meet with Nevada Senators—all to demand the Senate to include a pathway to citizenship in the Build Back Better Act. 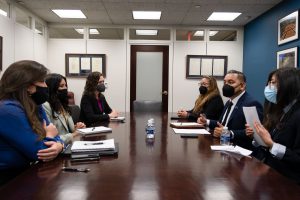 Rico Ocampo, our Immigrant Justice Organizer, and Crystal Lugo, our digital organizer, along with Make the Road members Areli Sanchez, an undocumented member, and Edurne Gonzalez, a DACAmented Reno-based member joined Make the Road States and other immigrant advocacy groups on Tuesday’s march.

The march, which began at Union Station, called for a pathway to citizenship, good care jobs, access to childcare and universal preschool education, paid family leave, green infrastructure, healthcare for all, and affordable housing. Along with thousands, our Nevada family chanted all the way down to Taft Memorial Park, an area next to the United States Capitol.

Two press conferences were held at Taft Memorial; the first press conference featured many of those directly impacted; they shared their stories and frustrations in front of thousands. Congresspeople like Congresswoman Jan Schakowsky, Congressman Lou Correa, and Congresswoman Ayanna Pressley spoke. 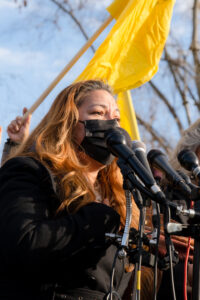 Our very own Areli Sanchez was introduced by Nevada Congresswoman Dina Titus; Sanchez shared her story and asked those in power to deliver a pathway to citizenship this holiday season. We are so proud of your outstanding braveness, Areli! 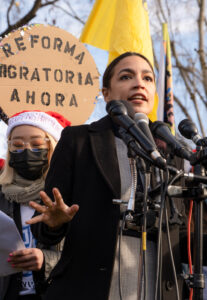 “I’m tired of fighting for my family and my community and only getting breadcrumbs,” said Gonzalez to Senator Catherine Cortez-Masto’s staff. “Effort is not enough—effort alone did not earn me my degree.” Gonzalez is the head of the household and holds a master’s degree in biotechnology from the University of Nevada, Reno.

Gonzalez also highlighted the need to help all undocumented—not just youth—and support undocumented Latinx women in STEM. Thank you for sharing your story with our Nevada Senators and Make the Road Nevada, Edurne. We admire you immensely.

The team handed our members’ letters, which were penned during a member meeting, to Senator Catherine Cortez-Masto’s and Senator Jacky Rosen’s staff, respectively. The letters were written by Argentinian, Columbian, Mexican, and Chinese immigrants urging the Senators to deliver a pathway to citizenship.

Thank you, Senator Catherine Cortez-Masto’s staff and Senator Jacky Rosen, for speaking to our Nevada members and centering their voices.